Legacy Fighting Alliance’s first event of 2021 kicks off on January 15. Fresh off a bloody war against LFA LW champion Bryce Logan, Jacob Rosales is looking to get back in the driver’s seat. In his way, he will take on surging lightweight Jose Martinez. In Martinez, Rosales has an opponent who enters the fight riding a three-fight win streak. With Rosales coming off a loss, Martinez is coming in with momentum, and many believe Martinez could be striking at a good time.

.@LilBadger155 is ready for a big 2021. He returns to the @LFAfighting Octagon in the co-main event of #LFA97! 🦡#MMA#LFANation@UFCFightPass pic.twitter.com/q0vmH6n4Cy

LFA 97: Looking Ahead to Rosales vs. Martinez

Upon reaching out to Rosales, I got his thoughts on his weight cut and upcoming match-up with Jose Martinez. First, he discussed his willingness to get back in the cage. The young lightweight mentioned that his weight cut was going smoothly. In fact, he reiterated that by saying, “Cutting weight isn’t too bad. I usually eat pretty healthy and it floats right off, and for training, nothing really changed.”

“Since everything I need is at my gym already, I’m able to lift, train recover all in one place,” he added.

Prior to his setback against Logan, Rosales was looking great inside the cage. Notably, he dominated Salaiman Ahmadyar at LFA 81: Emmers vs. Barbosa. Not to mention, the young prospect has plenty of wins by submission and knockout. Mainly because when his standup gets to be too much, opponents often shoot and leave their neck out.

For that reason, “Lil Badger” has picked up plenty of guillotine chokes. Conversely, Martinez brings experience into the fight and will be a tough test. When asking Rosales about that he observed that “I always have some sort of game plan going in. Sometimes I adapt but for the most part, I stick to the plan which is going in there and be the baddest meanest person I can be.”

One thing is for sure, after our conversation, it was clear that Rosales intends to make a statement at LFA 97.

LFA 97 is set to take place January 15, 2021 at the Hartman Arena in Park City, Kansas. The event will air live on UFC Fight Pass. 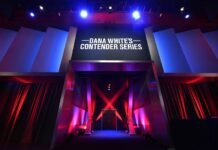