Legacy Fighting Alliance finished off a busy month on Friday night with LFA 87. It was the final of four cards since LFA returned to action at the start of July, and capping things off was a lightweight title fight for the promotion’s vacant 155lb belt.

That main event saw Bryce Logan earn this third win in a row, and the championship, via a three-round unanimous decision against Jacob Rosales. Logan’s last couple of losses prior to his current run came to Nate Andrews, who competed for the PFL last year, and Demarques Jackson, in a bout under the Bellator banner. Moving to 12-4, Logan has a great opportunity to get picked up by a larger promotion with another good win or two.

Full results for Friday’s card, which once again went down in Sioux Falls, South Dakota, can be found below. 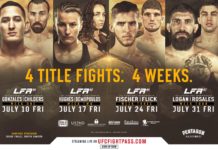 LFA Announces Return with Four Weeks of Fights in July