Paige VanZant’s BKFC debut is on track for February 5 as she finally has an opponent in Britain Hart.

It is official: Paige VanZant will finally be stepping into the BareKnuckle Fighting Championship ring in a little over a month, as she will face boxer Britain Hart on February 5.  Multiple sources confirmed the news in a report by MMAFighting on Thursday.  VanZant is expected to be the headliner for one of the most anticipated BKFC events in their short history.

For those unaware, Paige VanZant will be taking a hiatus from mixed martial arts after signing a multi-fight deal with BKFC earlier this year.  “12 Gauge” enters the cage after 13 fights in MMA that included matches in both the UFC and Invicta FC.  VanZant is most famous for being a leading example in the opportunities available to today’s fighters if they are successful in building their brand on social media.  Getting off to a 3-0 start in the UFC, VanZant went on to have several mainstream opportunities including making the finals of Dancing with the Stars, winning a celebrity episode of Chopped, and being only the second MMA fighter to ever appear in the Sports Illustrated Swimsuit issue.   VanZant most recently fought rising star Amanda Ribas at UFC 251 in July.

Britain Hart has competed in both traditional and bare knuckle boxing, most famously having fought Bec Rawlings in a BKFC event in 2018.  Hart notably started her collective record at 0-5 with bouts in both sports, then fought to two consecutive draws, and currently is on a two-fight win streak with one win in boxing and one in bare knuckle.  Hart last fought in BKFC, where she won by fourth round TKO in November.

BKFC has yet to announce more fights for the undercard of their February 5, 2021 event. 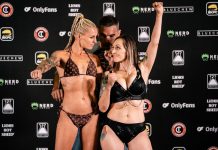