A light heavyweight bout between Magomed Ankalaev (14-1) and Nikita Krylov (26-7) has been added to the UFC’s planned Fabruary 27 event.

With both athletes coming off big wins in 2020, this bout looks to be a key match-up for the divisional hierarchy.

News of the booking was first reported by ESPN’s Brett Okamoto. Prior to the bout agreement, Ankalaev went back and forth with the rebooking of his controversial rematch with Ion Cutelaba. Ultimately, the 28-year old Russian finished Cutelaba again, but this time more convincingly. Before that heated rivalry, Ankalaev dominated the competition. On top of that, his only loss in the promotion came to Paul Craig, a Hail Mary comeback with a second left in the fight.

Similar to the emphatic win Ankalev picked up against the Brazilian, Krylov had a career-defining win last time out as well. Specifically, Krylov showed he belonged at the top of the 205lb division after he beat Johnny Walker last March. Despite alternating between wins and losses lately, Krylov has faced tough competition. His strenuous UFC schedule consists of many high-level light heavyweights. Overall his revenge-filled win over Ovince St. Preux indicated to the company brass that Krylov’s ceiling is high. Not to mention, Krylov faced Jan Błachowicz before the Polish native became champion.

Sporting a five-fight win streak, Ankalaev has been on a collision course with a tough test like Krylov for a while. And their February 27 showdown won’t be the only light heavyweight action that night. Also on the card, former title challenger Dominick Reyes will face the surging, Jiri Prochazka. Since four top light heavyweight athletes are going at it on the same night, there’s a strong possibility that the card will deliver at least one contender. After Israel Adesanya attempts to capture a second title versus Jan Błachowicz, the winner of Magomed Ankalaev and Nikita Krylov will be in a premium position for a potential title eliminator. 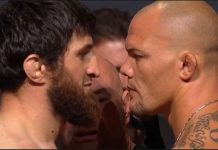