Former UFC featherweight champion Jose Aldo enters UFC Vegas 17 still in search of his first win in the bantamweight division. Two trips to the octagon at 135lbs have thus far failed to produce the desired results.

Saturday night, Aldo will hope that the third time is the charm when he faces Marlon “Chito” Vera. But his last bout, a fifth round TKO loss to Petr Yan, remains a performance Aldo is proud of.

“I think it was a great fight,” Jose Aldo said of his title fight against Yan. The only problem was the outcome, he noted at this week’s UFC Vegas 17 media day. “I like the performance. I think I can show everybody my skills. But I didn’t win.”

When it comes to upcoming opponent Vera, “I always think my opponents are great fighters,” said Aldo, who added that “I train hard for everybody.”

With cuts looming for the UFC roster and Aldo struggling of late, one would anticipate that there’s a certain amount of pressure on Aldo. But the Brazilian doesn’t feel that way.

“What keeps me motivated is the victory,” Aldo replied when asked what keeps him going at this point of his career. And while he’s not thinking about a rematch with Petr Yan right now, with Marlon Vera in front of him, “I want to be a champion in my new division. That keeps me motivated every day.”

The Pro Take: The King of Rio Jose Aldo Victorious at UFC 265 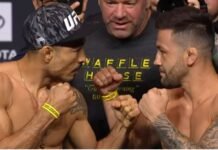 The Pro Take: Volkanovski and Ortega Go to War in Five Round Thriller at...