Ahead of this Saturday’s UFC Vegas 17, there has been plenty of talk around Stephen Thompson’s place in the welterweight division. More than a few G-bombs dropped.

“Gatekeeper.” Despite his status as a two-time title challenger who has continued to fight the top talents in the division. Despite coming off a win over Vicente Luque in his last fight.

Thompson (15-4-1) has heard that talk. But he’s not bothered by it, he told Cageside Press during the UFC Vegas 17 media day this week. “It doesn’t really bother me. I just know what I’m capable of, and that I’ve got a lot more in me,” said Thompson, who noted that while he may be getting older, he’s still low mileage. “I’m 37-years old. I’ll be 38 February, but I feel like I’m 25 and still improving every day. I came in this game fairly late. So I haven’t taken a ton of damage. The only time I’ve been knocked out was with Anthony [Pettis].”

Pettis happens to be fighting on the UFC Vegas 17 card as well this weekend. Despite the loss, it’s Thompson, not the younger Pettis, who is probably more secure in terms of his place in the division right now.

Thompson, meanwhile, is still looking to claim that elusive title in the UFC. “I feel fine, I feel awesome. I know that I can be champion in 2021. And that’s my goal,” he stated.

Media and fans tend to love storylines to go with their violence fix. In the case of Thompson vs. Neal, it’s the good ol’ veteran vs. prospect tale. While they have a similar number of fights on paper, at least in MMA, “Wonderboy” Thompson is the veteran. Has fought for gold. Won oodles and oodles of titles in kickboxing. Neal is seven years his junior, and clearly looking to make a name for himself.

As much as we might like those storylines, Thompson doesn’t care who he fights. “He could be the top five or the champion or the number of 15th ranked guy,” said Thompson. “Geoff Neal’s a beast, and if you fight in the UFC, I mean, come on, you’re dangerous man. Anything can happen out there.”

Thompson is well aware of Neal’s finishing ability as well. “Handz of Steel” has knocked out three of his last four opponents. “And he’s a big welterweight, very strong,” added Thompson. “So I know he’s going to use the smaller cage to his advantage. But whereever the fight goes, I’m going to be ready for it.”

Admittedly, Thompson is a little surprised to even be fighting Neal this weekend. His opponent was hospitalized and near death back in August, with an infection gone septic and congestive heart failure. 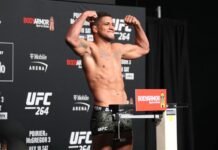 UFC 264: Stephen Thompson Gets Confidence Boost Knowing There’s Only “One Guy” To Help Opponents Prepare for Him