Check out a video highlight version of this week’s WCC in the YouTube video above for your viewing pleasure!

Geoff Neal is a fighter that is undefeated in the UFC and fast rising with a trajectory towards the top of the 170lb division.

It is important to note that since being signed to the UFC in early 2018, Neal has not missed weight, and has only used his total alotted grace pound just one time. Neal hasn’t missed weight for a pro fight in over six years.

Neal began his pro MMA career about eight years ago, with a welterweight bout, but competed in a middleweight bout in his sophomore MMA fight.

Geoff missed weight for the first time way back in 2013 for his fight against Martin Sano. Neal weighed in at 172lbs for the bout, ahead of being handed his first loss in pro MMA.

Just over a year in a half later in 2014, Neal missed weight by a pound for the welterweight division ahead of his fight against Charlie Ontiveros.

In Geoff’s second to last fight before getting a shot on DWCS, he challenged Kevin Holland for the Xtreme Knockout Middleweight Championship. Geoff tallied the second loss of his MMA career in this bout.

Neal defeated Chase Waldon in the first round of their bout on the very first season of Dana White’s Contender Series in 2017. Waldon was a career middleweight while Neal has only had a few fights in the weight class. This performance was one of the true testaments to Neal’s strength and punching power even against guys 15lbs heavier than where he often competes. Geoff had just competed at 170lbs in a round one finish of Bilal Williams in the LFA promotion just 11 days prior.

Neal is on a five fight undefeated streak in the promotion with four fight finishes including his most recent finish of Mike Perry last December. Its evident that not only is Geoff big for the welterweight division, but also extremely skilled and talented too.

Geoff had to spend a week in the ICU at the hospital, attached to a dialysis machine less than a month away from his scheduled bout against Neil Magny. Geoff is scheduled to fight  a very difficult style in Stehpen Thompson at UFC Vegas 17 in a fight within the welterweight division. 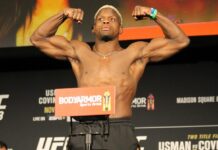