UFC President Dana White says that the promotion is looking to book Carla Esparza next against strawweight champion Zhang Weilli after Rose Namajunas said she did not want a title shot.

In an interview with Caroline Pearce of BT Sport, UFC President Dana White said that the UFC is moving on from Rose Namajunas as the next title challenger for reigning strawweight champion Zhang Weilli and are instead looking at former champion Carla Esparza to fight for the title next.

When asked about the former strawweight champion Namajunas, White said “What I’m hearing is that Rose doesn’t want a title shot.  She doesn’t want to fight for a title.”  When Pearce brought up if it was because Namajunas did not like the pressure of being champion, White agreed, saying “I don’t think she did.”  White went on to state that going by the rankings in the division, Esparza would be the next challenger for Zhang.  Namajunas most recently returned to action in July where she defeated Jessica Andrade.  Afterward, she was unanimously considered the number one contender with even Zhang saying she expected and wanted to face Namajunas next before the former champion rematched Andrade.

Current champion Zhang is on a 21-fight win streak that has seen her become one of the UFC’s most popular fighters overseas.   Last year, despite being only three fights into her UFC run, Zhang was given a title shot in her home country against then champion Jessica Andrade and shocked the world with a brutal first knockout of the durable veteran to win the belt.  Zhang quickly became a star overnight with her television appearance in China doing massive numbers on social media.  “Magnum” followed it up with one of the best fights of 2020 as she defended her title in a back-and-forth war against former longtime champion Joanna Jędrzejczyk in March.

Carla “Cookie Monster” Esparza is on a four fight win-streak that has seen her reassert herself in the current title picture at 115 pounds.  Esparza was the inaugural champion of the strawweight division after title against Namajunas in the finale of The Ultimate Fighter Season 20 back in 2014.  She subsequently lost the title to Jędrzejczyk and went on a 3-4 stretch prior to her current win-streak.  Most recently, Esparza was expected to fight rising star Amanda Ribas at UFC 256 but withdrew from the bout in November due to undisclosed reasons.

White did not state when he expected the fight between Zhang and Esparza to take place in 2021.

Following White’s interview, Pat Barry, Namajunas’ longtime coach and partner, refuted White’s assertion that she did not want the title fight. “That is absolutely not true – we absolutely want the title fight,” Barry said (via MMA Fighting). “Who would turn down a title fight? We just don’t want to air this out publicly. If there was some confusion, they can call us to clear it up.” 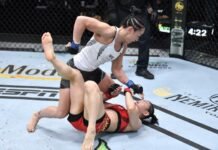