Big Bang II was broadcast via tape delay, the fights comprising the six-bout event held alongside the original live Big Bang card a week ago in Kallang, Singapore. The second half of the event included Muay Thai and kickboxing action in addition to MMA, and was topped by a flyweight Muay Thai fight between Japan’s Taiki Naito and former ONE Flyweight Muay Thai World Champion Jonathan Haggerty.

In the co-main event, kickboxing action saw Nieky Holzken looking to defend his #1 ranking at lightweight against Elliot Compton.

On the MMA side of things, two ONE Championship standouts were set to collide as Agilan Thani went up against American Tyler McGuire.

A stream of the ONE Championship: Big Bang II broadcast can be viewed above where available. Full results from the event, which begins at 7:30AM ET on Friday, are below. 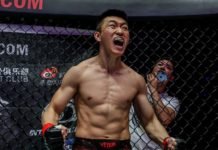