Juliana Velasquez fought a patient fight at Bellator 254. She set the pace, and in the opening rounds, it was a conservative one to be sure. But as the fight went on, she showed glimpses of brilliance — never more so than with a punishing jump knee that broke flyweight champion Ilima-Lei Macfarlane’s nose.

At the end of five rounds, the scorecards were clear. Velasquez (11-0) had won the title. And handed the previously undefeated Macfarlane the first loss of her career.

“I always knee that I had the potential to be champ,” Velasquez told media outlets including Cageside Press following the bout. That potential has now been fulfilled.

The Brazilian noted that she used her reach to keep the Hawaiian on the outside early. “I knew that she could be dangerous if she got in close, which in the fourth round, she showed that. Once she got me to the ground, she kind of controlled me a little bit there. But at the end of the day, I believed in myself, and here I am.”

Ahead of Bellator 254, there had been plenty of talk about the women’s flyweight division being the next to take part in a Grand Prix tournament. The welterweights and featherweights have had their turn — but Bellator CEO Scott Coker has refrained from confirming which weight class will come next, saying he wanted to see the outcome of Thursday’s main event.

“I would love to have a tournament. I feel it would be great to do that tournament format, changing things up,” she said following the biggest win of her career. “We would get to take a look at a lot of different fighters depending on how the fights went in the tournament. I would definitely be interested and excited if Bellator chose to do a flyweight female tournament.”

With Velasquez, Macfarlane (who also expressed interest post fight), Liz Carmouche, Alejandra Lara, and others, the promotion certainly has the talent at 125lbs, should they want to go that route. 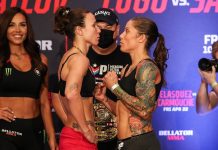