When Angela Hill was forced out of UFC 256 due to a positive COVID-19 test, it was LFA alum Sam Hughes getting the call to step up.

Matchmaker Mick Maynard rang Hughes’ coach up barely a week out from the fight, and revealed who the opponent was. And the date. “We were both kind of shocked, but we’re always getting ready, and ready to go,” Hughes said during a virtual media day promoting the event this week.

That opponent, of course, was longtime strawweight veteran Tecia Torres. Quite the challenge for a fighter making her UFC debut.

Hughes (5-1), a former title challenger in LFA, always knew she’d get another shot at the big time, after losing a championship opportunity against Vanessa Demopoulos earlier this year. “Sampage” bounced back with a submission win in October, however. And she’s found an upside to the short notice nature of her UFC debut.

“I feel really really good going into this fight. I think the best thing for me is that I actually didn’t have a six week training camp or a four week training camp to let the nerves set in,” Hughes admitted. “I’ve just been busy with everything else. So it’s been good, it’s been a really productive week, and I’m super excited to get in the cage Saturday night.”

As for her opponent, Torres, “she’s ranked number nine for a reason,” said Hughes. “But I know where her holes are, and I know where my strengths are, so I tend to capitalize on that, and I’ll show you guys on Saturday.” 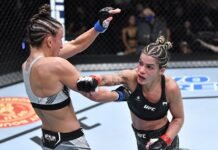 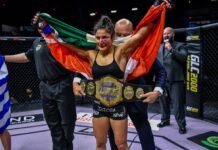