Rafael Fiziev was supposed to face Renato Moicano last month. As has so often been the case of late, one of the pair — Moicano in this instance — tested positive for COVID-19. And so the fight was pushed back to this weekend’s UFC 256.

Fiziev admitted during the event’s media day this week that he was a little worried about it happening again. “Of course I worried about this. I worried about my opponent, and I worried about me too. Corona is everywhere now. It’s not like Thailand [where Fiziev trains and coaches].” But, as he noted, if the fight were to be postponed again, it would be out of his control anyway.

And on the upside, his fight with Renato Moicano is now part of a Pay-Per-View. The final big event of the UFC’s 2020.

“When I saw this [being on the PPV], of course this is some pressure for me, but it’s nice pressure,” Fiziev explained. “It’s like, it’s [given] me more energy, made me more motivation for for this fight.”

As both a fighter and instructor with Tiger Muay Thai in Thailand, Fiziev keeps a busy scheduled. But when it comes to finding a balance, in the end the Kyrgyzstan born fighter just likes to stay active.

“It’s good when I’m busy. When I’m busy, I just come to train every day. After fighting, the next day you come to train, you come to teach and every day you do more techniques, you watch more techniques,” he stated. “It’s more creative, because you don’t stay in one place.” For Fiziev, it’s important to mix things up, and not train the same way every day for opponents. “It’s good for me to stay busy. But just before the fight, maybe two months or one and a half months ago now, I stopped teaching and just focused on my fight.” 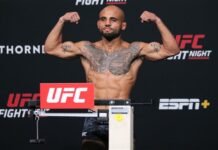 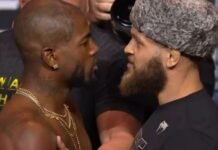