She may have lost the second round, but Valentina Shevchenko dominated again to defend her belt against Jennifer Maia at UFC 255.

Valentina Shevchenko put her flyweight title on the line for the fourth time taking on Brazilian contender Jennifer Maia at UFC 255. Shevchenko is just a class above the rest of the flyweight division. She is 8-2 in the UFC and the two losses happen to be against the greatest female fighter of all time, Amanda Nunes. Shevchenko has brutal stoppages in two of her three title defenses.

Maia was the Invicta FC flyweight champion, defending her belt twice before moving on to the UFC. She’s 3-2 since then, losing to former top contenders Katlyn Chookagian and Liz Carmouche. Maia earned her title shot by submitting then number-one contender Joanne Calderwood earlier this year.

Shevchenko went to her kicks right away then surprisingly took Maia down, entering the guard of the Brazilian. Maia had her locked down in guard, limiting Shevchenko to small punches to the body and the head. The entirety of the round was spent in Maia’s guard.

Shevchenko hit a spinning back kick to the body right away then nearly took Maia down, but Maia popped up immediately and landed a knee to the body. Maia pushed Shevchenko against the cage and pinned her there. Shevchenko went for a takedown and Maia reversed it on the way down, putting the champion on her back. Maia moved to half guard and Shevchenko attempted a reversal, but instead got back to guard. Shevchenko nearly set up a triangle choke, but Maia pushed through it. It was a very good round for the challenger.

Shevchenko got two left hands to land out of the gate and Maia fired back. A clinch battle began, but the fight remained on the feet. Shevchenko fired a head kick then a pair of straight punches down the pipe. A strong one-two led to a throw for Shevchenko right into side control. Maia worked her way to half guard then stood up and pushed Shevchenko up against the cage. However, the champion landed a throw before the end of the round.

Shevchenko cracked Maia right out of the gate in the fourth round. Shevchenko was active with her two-punch combinations and started to find more success on the feet. Maia was able to counter one of them with a right hand, but was then taken down right into side control again. Maia got back to half guard and Shevchenko spent some time there before taking the back of Maia during a scramble. Maia rolled back around to half guard and Shevchenko stayed just busy enough to prevent a standup.

Maia forced a clinch right away in the final round but couldn’t do anything with it as Shevchenko landed an elbow on the exit and a body kick. Shevchenko landed a hard spinning kick to the body then blitzed in with a combination. That led to another Maia-favored clinch. She nearly landed an arm-drag throw, but Shevchenko popped right back up into the clinch of Maia. Shevchenko forced her way out and landed a combination on the challenger. Maia tried for another clinch but an elbow as punishment. Shevchenko continued to land heavy strikes, both with her kicks and her hands. The fight ended with fiery exchanges and Maia was able to crack the champion with a few counter hooks.

UFC 266 to Feature Volkanovski vs. Ortega and Shevchenko vs. Murphy 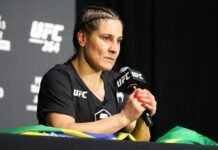 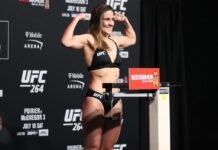