A couple of the UFC’s young guns have been booked opposite one another. Women’s flyweights Maycee Barber and Alexa Grasso will face off next February at UFC 258, in a fight that will see Barber return from an extended layoff.

UFC officials announced the bout on social media Tuesday. The event is set to take place on February 13, 2021 at a location yet to be announced.

Barber (8-1) started her career in style, putting together eight straight wins, in the process winning her way into the UFC via Dana White’s Contender Series. She stormed out of the gate in LFA prior to arriving in the octagon, and has finished all but one of her victories.

However, “The Future” was put on pause after meeting Roxanne Modafferi at UFC 246 back in January. Barber suffered a lopsided defeat, and injured her knee in the process, which has kept her out of action since.

Alexa Grasso (12-3) is a fellow prospect who just recently made the move to flyweight. The Mexican fighter debuted at 125lbs in August, defeating Ji Yeon Kim by unanimous decision.

Maycee Barber has long desired to top Jon Jones’ record as youngest UFC champion. Now 22-years old, she’ll need to stay busy, and healthy, if she wants to achieve that goal. Grasso, meanwhile, would put together two wins for the first time since 2016 should she come out victorious. 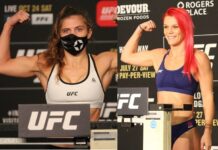