Sean Brady is out of his middleweight bout against Belal Muhammad (17-3). Which has opened the door for Dhiego Lima (15-7) to step in.

First reported by Farah Hannoun at MMA Junkie, with Brady dropping out, Muhammad and Lima are set to put on a show at welterweight.

Definite intrigue surrounds Belal “Remember the Name” Muhammad to see how he adapts to this new challenge. Muhammad is right on the cusp on top contention, making this an important fight for the Chicago native.

While his wrestling can sometimes dull the audience, when he is judicious with his ground and pound, he is a problem for the division. Overall Muhammad and Lima should for an exciting fight.

As demonstrated by his last three wins, Muhammad is a monster on the ground. Specifically, his grappling acumen frequently wins him fights. Over his last three, Muhammad has picked up victories over Curtis Millender, Takashi Sato, and Lyman Good.

Lima, training at American Top Team, will be fighting for the first time since October 2019. Criminally underrated, the Brazilian is riding a three fight win streak. Not only that, but he’s a long welterweight, and that reach advantage could be the downfall for Roufusport product Muhammad. Lima enters the bout with a huge six inch reach advantage. 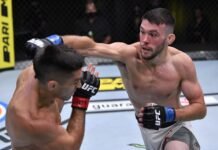