Tom O’Connor takes on Jose Caceres at XFC 43. It goes down on November 11 in a lightweight attraction, part of the promotion’s previously announced return to live events. The event emanates from Tabernacle in Atlanta, Georgia, and will be broadcast live on NBC Sports.

At 8-1, O’Connor’s record boasts six finishes. Undefeated since his pro debut, “Big Nasty” will be fighting for the first time since 2018 on Wednesday night. Below are several excerpts from our conversation with the Canadian combatant.

“Yeah, we’ve been working hard. I mean with COVID, there was that uncertainty of the gyms being able to open up again. As soon as they did, everybody was in the gym and it was kind of awesome to see a big resurgence. You expect that but there’s still that uncertainty and the whole team got right back to it.”

“I have a really solid team of everyone here in Lethbridge helping me out. I’m sparring with Conner Derry, Cody Jerome, Kolton Menzak…Then I also got some guys from CMC working with me. Lee Mein helping me out and putting me through some training. Tim Tamaki coming out and Spencer Rohovie.”

“So they’ve been really working hard as well and greatly appreciated. When you’re not sure the partners you can get and then everyone actually shows up and puts it on you, that’s a good place to be.”

“It was one hundred percent Ajay at EPOK…just kept hunting and found an awesome opportunity in this fight with Jose Caceres. XFC is such a cool organization and looking forward to going and get a fight. Crazy opportunity and super blessed to have it.”

Health hindrances and returning after a hiatus

“I was always confident that I was coming back. Was just waiting and taking the time off with the injury. I realized even how more how much more important the lifestyle is. When you’re rehabbing a serious injury, the frustration of not competing is something that drives all athletes, in general, insane. There’s seasons to life and we can’t be doing this forever.”

“So being sidelined, it sucked, it hurt… Everyone on my team just kind of keeping me headstrong and waiting. Now feeling 100%, and just ready to compete. When the injury happened, I was cheesed, pissed. But it’s crazy how things will open up like this and now there’s this opportunity because of all of that. Super excited, weird how the world works, weird how life works.”

Whether the future is at lightweight, featherweight, or the two divisions concurrently

“I wanted to fight at both. But I also got a smart team here by me. If their game plan is to take fights at 145, I can make that weight. So that’s what I’ll do. You know, it’s just really going with the flow and the opportunities that present itself. Making sure I work hard every day at getting better. And then when the opportunities present itself, they will. In this case, it’s a 155 tournament. I feel like I can beat anyone in the world. So that’s what I’m gonna go out and do.”

It seems like you think he’s a slick guy and he’s a talented, individual all-around…What are the stylistic tells you expect from him and you’re going to be adjusting to in the fight?

“He has a lot of fights. I think his record is 15-10. He’s well experienced and he’s fought obviously some of the best in the world and he’s beat some of the best in the world. So I’m not taking him lightly anywhere. I expect him to understand the entire game of mixed martial arts. I know that he has a lot of finishes with submissions in grappling exchanges and he’s really slick on the ground. He’s going to be a lot longer than me.”

“So it’s not something I haven’t dealt with before but I mean it’s something to make sure I am aware of. I’m really coming out to put my game plan on him like I’m ready to break his will down. That’s what my fighting style is. I’m just going to be coming forward putting pressure on. I’m going to try and cut off the cage and you know, drown him.”

The Jackass rooted origins of his nickname Big Nasty

“I don’t want to claim all of the credit. You know, it was mostly just our group of friends. Growing up here in high school in a small town, we’re having fun. Every day you leave school, you’d have fun with your buddies. Jackass was around. That movie had come out.”

“So you got some crazy heroes that you got to try and represent. Sometimes you are the challenging one but yeah, I would take on a challenge pretty much any turn. I had a few friends that would do extreme things too though. So I don’t want to take all the credit.”

So there’s like a communal aspect to it? There’s a small group of Jackass lads out in Fort MacLeod kind of thing?

“I feel super lucky though. It’s the same thing with those guys, Tom Harris was in the Wolfpack and he’s kind of who introduced me to martial arts. All of those guys, I grew up playing sports with all of them. It’s funny how all these things just fall into place and even talking about rugby the other day. Fighting at 155 seems like a topic that keeps coming up and to me, I’m good either way.”

“Playing rugby, you’re all sizes. There’s every size of rugby player. There’s the big props that are huge looking to crush you. That’s the thing. It’s a tough sport too. So they’re coming out to kill you. Same mindset, kill or be killed. I had to tackle big guys and so I’ve never put as much weight into that debate as it seems there is.”

“But 145 or 155, I like fighting, man. I like competing. That’s what I love. It’s funny how the world of Fort Macleod traveling to the world of Lethbridge just kind of made me the way I am.”

“Thank you for reaching out to me. I appreciate it. I love the interviews and getting to talk to everyone and staying in the MMA world. It’s a cool community. The MMA Twitter, the MMA world, the MMA universe. Shout out to my sponsors; Progressive Fighting Academy, of course. Everyone here, the team here is awesome.”

“Hard Training everyone there, same thing. Just incredible, everyone’s pushing to be better every single day. And I love that attitude. Everyone at EPOK Agency. They’re working just nonstop to make their athletes better and the whole team better. We can grow and move forward all together. I’ve got Frontline Towing, saved me more than once. So they’re an awesome sponsor. Adapt and Flow Optimization. And that’s it.”

“Yeah, I agree and shout out to you too because it has been fun. And just the fights you’ve been there for and it’s a tight-knit community. It’s pretty cool…Darren (Cliffe) there, he’s incredible too.” 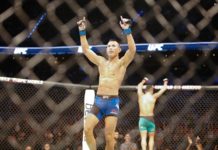 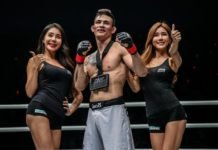