2020 has been an interesting ride for Ian Heinisch.

Sure, you can say that for most of the planet. But Heinisch (14-3) has jumped from training camp to training camp, seen a fight nearly cancelled due to a false positive for COVID-19 by his cornerman, and been forced out of a fight over the summer with Brendan Allen.

The middleweight returns this weekend, once again paired up with Allen. And during the UFC Vegas 13 media day, he said “it’s the same mood” as it was back in June, when he defeated Gerald Meerschaert, that he’s experiencing now. “I made a ton of changes coming off those two close losses that I suffered last year. I’m building that momentum, that confidence is building. I’ve assembled a new team, new coaches, and I just feel my momentum is picking up and I’m excited to have the Hurricane 2.0 put on another show this Saturday.”

The fight falling through like it did “was a huge bummer,” Heinisch admitted. After all, he’d been looking to take advantage of the pandemic to get an extra fight in. “Especially coming off a one minute knockout. I was trying to get that quick turnaround, unfortunately, got injured. First week back to training. And yeah, I got to watch Brendan Allen fight a debut guy who I believe is a 170 pounder. And I wasn’t impressed.”

What Heinisch saw the night he was originally supposed to fight Allen “was a back and forth fight [between Allen and Kyle Daukaus]. It was an entertaining fight to watch, but I’ve seen so many holes in his game. I believe I’m going to capitalize on that, and the dude’s just not quite at my level yet.”

Heinisch and Allen were both LFA champions previously. They’ve had a bit of a beef online, or as Heinisch put it, “we’ve had some words exchanged on Twitter in the past.” But there doesn’t seem to be much in the way of hard feelings on Heinisch’s part now that the fight is here. “I knew eventually we were going to fight, and he earned his shot, he’s coming off three or four wins in a row.”

While he doesn’t believe Allen is on his level, there are other fighters Heinisch is looking at. Of course, he has title aspirations. He also wanted a shot against breakout star Khamzat Chimaev, Heinisch explained this week.

“I don’t try to get jealous about anyone’s career path or their journey, because everyone’s different and God has different plans for different people,” Heinisch explained. But that said, he added that “I would love to fight Khamzat. I was one of the guys that was like, ‘bro like I’m ranked, you want to test yourself, get into the rankings, I’m here.'”

“I feel like we kind of have similar styles: we have a great ground game. We both have great boxing and striking as well. When I was out in Thailand I loved training with all those Russian guys, and [at] Xtreme Couture.” Even as a kid, given the chance to go to Russia, Heinisch loved the mentality of the fighters there, he said. “So I would love that challenge. But you know, good for him. He got a huge jump, he passed everyone to fight Leon Edwards and I felt like he kind of ducked me and Neil [Magny], but that’s his path. I’m not hating on him.” 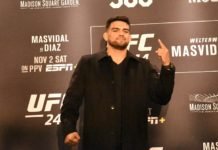