With Fight Island once again behind them, the UFC returned to Las Vegas this week. Saturday’s UFC Vegas 12 card was the last hurrah for middleweight legend Anderson Silva, but it was opened by a pair of bantamweight prospects. Miles Johns and Kevin Natividad served as the curtain-jerker, with Hawaii’s Natividad finally making his promotional debut, after it fell through back in September.

That heartbreaking last minute cancellation for Natividad was supposed to be a main card slot against Brian Kelleher. But a false positive for COVID-19 pulled the rug out from under the bantamweight.

Saturday night, however, Natividad finally got back in action, an underdog against fellow LFA alum Johns. And through the opening two rounds and then some, Johns lived up to his billing as the favorite.

Firing a half-hearted leg kick early, it wasn’t long before Miles Johns drove his opponent back against the cage, looking for a takedown. Natividad broke out a whizzer to fend Johns off successfully. A nice little confidence boost, as they moved back to range. Natividad then pressed forward with a combo, only to be briefly taken down off a single leg. Johns was slow to engage, however, and Nativdad moved back to his feet with ease. That would be a trend throughout the bout: Johns either struggling to complete the takedown, or landing it but being unable to keep Kevin Natividad down. Johns also had his jab working as a suitable Plan B, and landed it with ease several times throughout the round, which likely gave him the edge.

The second round saw Johns start things out in similar fashion. His jab was there early; about a minute and a half in, he drove Natividad into the fence. The takedown wasn’t there, Johns ate a couple of elbows, and the ref then broke the pair up and restarted things at center due to a lack of action. Natividad showed some explosive potential when he launched a jumping knee in the final two minutes of the round. But he landed short, and pretty doesn’t win points. Johns broke out a spinning backfist closer to the end of the second, which was the highlight of the round.

Round three had Natividad in need of a finish. It was Johns who got that instead. Breaking out of a clinch, Natividad’s head dipped just as a Johns uppercut connected. It was lights out for Natividad, and Johns had his first finish in the UFC!

SENT HIM FLYING 😳@MilesXJohns with launching power to start the night! 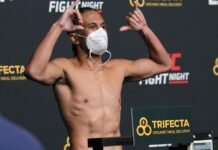