UFC Vegas 12 has come and gone, and the Halloween card started off with a bang. From the get-go, it was finish after finish at the event, with the judges only being required for three fights in total. With that in mind, the UFC opted to hand out four $50,000 U.S. Performance of the Night bonuses following the card.

No Fight of the Night was awarded.

Among the big winners was octagon newcomer Adrian Yanez. Originally scheduled to face Aaron Phillips, Yanez wound up paired with a short-notice replacement in Victor Rodriguez. The Alaskan FC bantamweight champ was game, but wound up floored in the opening frame by a head kick.

Also on the preliminary card, Alexander Hernandez set up his finish of Chris Gruetzemacher with a high kick. His hands followed, and the ensuing knockout put Alexander “The Great” back in the win column.

Kevin Holland’s name being among the bonus winners might come as a bit of a shock, if only because the ending surrounding his fight with Charlie Ontiveros was rather murky. Holland threw his opponent to the floor in a takedown attempt, only for Ontiveros to verbally submit shortly after. Holland later revealed that his opponent had complained of a neck injury, likely from that takedown. Ontiveros was removed from the octagon via stretcher.

The final Performance of the Night bonus at UFC Vegas 12 was awarded to Miles Johns, who finished Kevin Natividad in the third round of their fun bantamweight scrap. Johns improved his record in the octagon to 2-1 in the process. 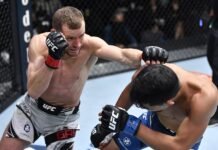