UFC Vegas 12 is official. The Fight Night card takes place this weekend, topped by what is expected to be the final showdown for “The Spider.” Anderson Silva, the former UFC middleweight champ and one of its last remaining legends, will make the walk to the octagon for the final time.

When he does, the Brazilian will take on Uriah Hall, in a fight that was first dreamed up years ago, when Hall was dispatching foes in flashy, thunderous style on The Ultimate Fighter. If the pair can harness some of their past glory, fans may very well be in for a treat this Saturday.

On Friday, all fighters on the card hit the scales for the official weigh-in. Greg Hardy had to take a bit of extra time to shed a final half-pound, but made weight. Two fighters did not — Cole Williams and Jack Marshman both came in heavy. A flyweight bout between Cortney Casey and Priscila Cachoeira was cancelled after Brazil’s Cachoeira suffered a fall during a difficult weight cut.

Photo and video highlights can be found below!

** Hardy missed the heavyweight non-title limit by 0.5lbs and was given one hour to make weight. He later made weight at 264.5

*** Jack Marshman was 1.5lbs over the non-title middleweight limit 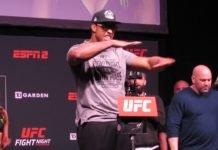 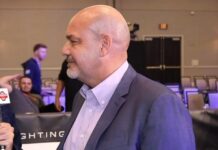