Alexander Volkov got back in the win column in a big way with a second-round body kick to stop Walt Harris at UFC 254.

Heavyweights looking to get back on track crossed paths at UFC 254. Alexander Volkov, who’s been very successful since coming over the UFC from Bellator/M-1, was coming off a loss to Curtis Blaydes. Walt Harris had recently had a three-fight stoppage streak snapped by the legendary Alistair Overeem.

Harris threw a combination out of the gate that ended with a head kick, but it was deflected by Volkov. Harris attacked with another series of strikes including another few kicks. Volkov landed a two-punch combination that stuck Harris in place temporarily, then knocked him off balance with a front kick. Harris tried to come inside, but was interrupted with a beautiful jab by Volkov. Harris came up short with a combination and Volkov made him pay with one of his own, then ate a hard right hand from Harris. The exchanges started to have more ferocity in them as the round went on. Volkov landed a right hand down the pipe as Harris was moving side to side. A two-punch combination staggered Harris, who punched his way out of trouble, making it to the end of the round.

Harris faked a takedown to start the second round then went to his punches. Harris shot for another takedown and was easily pushed aside. Volkov then landed a beautiful front kick to the body that staggered Harris. He charged in and finished the fight to get back in the win column.

After the fight, Volkov asked for a fight with Junior dos Santos, Alistair Overeem, or Jairzinho Rozenstruik as he seeks another run at the the heavyweight belt.

Alexander Volkov def. Walt Harris by TKO (Body Kick and Punches) in Round 2 (1:15) 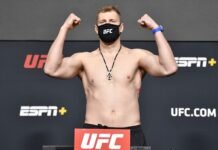 The Pro Take: A Tactical Ciryl Gane Gets the Victory at UFC Vegas 30