Terrell worked her final show for Bellator in September. A Ringcard Girl of the Year nominee on several occasions, she recently took some time to reflect on her experience with the company, her start there, and what comes next.

Dancing on the catwalk during my last moments as a Bellator Girl! 😌
If you watched my LIVE earlier you already know that today marks the end of an era for me as I say goodbye to @BellatorMMA. 😭
This has been such an incredible ride from start to finish. pic.twitter.com/obe1db4Erw

Also a model and podcast host these days, Terrell got her start with Bellator in 2009 when a manager brought the upstart promotion to her attention. “They asked to have girls send in videos saying why they would want to be a Bellator girl, etc. etc.,” she recalled. Terrell made her application video last-minute, which she described “the goofiest, weirdest video.” That led to a call from Bjorn Rebney, Bellator’s founder and CEO at the time.

“It was really exciting. I had already been a fan of MMA, but of course Bellator was brand new,” said Terrell. “I didn’t know what this company was going to be all about.”

Her beginnings, and the promotion’s as a whole, were humble. “Just started traveling around the country. Went to these tiny shows. Some of our first shows were so small, and when I say small, we didn’t have a venue so to speak,” explained Terrell. “We’d be in the middle of  an outdoor strip mall, [that] type of situation. And people would just walk up and watch the fights. It was very small, family-run style. And little by little, we’d climb the ropes, and obviously they’re at where they are today.”

Job security was a big question early on, Terrell admitted. “Every single season I would be like ‘hmm, wonder if we’re going to last? If we’re going to be back next season or what?’ because it was just so new, there was no way to know if we were going to make it.”

The Bellator ring girls were part of the promotion’s post-fight press conferences at the time, and Terrell confessed that they’d slip questions to the MC, “to ask ‘are you going to have the ring girls next year?’ to try to get answers.”

Silly stuff, as she put it. But at the same time, Terrell was taking a risk staying with Bellator, because it forced her to turn down other opportunities. “I was very fortunate in being extremely active as a model in my career. I’ve always luckily had a really beefed up calendar, I guess you could say, where I’ve had a lot of work.”

Mercedes had been signed as Miss Supercross as part of the motocross circuit, but when Bellator changed their calendar, moving primarily to Friday nights, she was forced to choose between the two. “Looking back on it, either way I would have gone would have been fine I’m sure, but I’m super glad I went with Bellator and I got to experience what I did.”

Now, it’s time to start a new journey. There’s still modeling, the MAJic Hour podcast, and an idea she’s hoping to set up down the road involving workshops with fans, perhaps virtually. She’s also joined OnlyFans, which Terrell acknowledged does have a certain reputation, in part due to a flood of strip club dancers joining the platform at the onset of the coronavirus pandemic.

That’s something critics need to get over, Terrell suggested. “People want to shame anyone on OnlyFans or want to shame the girls who went there or whatever. First of all, if you’re shaming anyone, you need to be looking at what’s going on with yourself,” said Terrell, “because it’s 2020, about to be 2021, shame has left the building. We’ve moved on.”

The site came along for her at the perfect time, she added. “I’d just come out of all that shame work, right? And it was literally the universe going ‘hey, you want to test it, and see how you’re doing now? Can you handle this?’ And I was like ‘alright, let’s f*cking go!'”

For Terrell, the allure of social media has always been about speaking directly to fans on a deeper level. It’s something she’s done on other platforms, in the comments section. With OnlyFans, “we’re finally going to have a place to have a direct conversation, in a more private format, instead of in the comments section.” Now, she refers to her DMs as almost like therapy. “For both me and them. A place where we’re having communication on a level that’s way deeper than I ever thought could come from social media. We’re getting into stuff [like] relationship healing. We’re getting into stuff that, I couldn’t have ever guessed this was the direction this was going to go.”

Of course, the “mutual [benefit] of it is I get paid to unlock posts and subscribers,” she added. But her OnlyFans is free, the revenue coming more from in-post content, she noted. And yes, alongside the conversation and weird, wacky side of her, there are sexy photos too.

Be sure to check out our full feature-length interview with Mercedes Terrell above, as she bids adieu to Bellator MMA.

UFC: Jessica Andrade Sold Nudes on OnlyFans to Pay Off Car, Not Surprised They Leaked 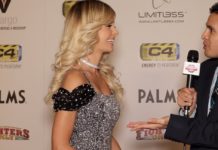