All joking aside, the Ringcard Girl of the Year category at the World MMA Awards 2019 was a hotly contested battle, and we caught up with four of the nominees beforehand.

Las Vegas, NV — UFC ring girl Jhenny Andrade walked away with the Ringcard Girl of the Year trophy for the third year running at the World MMA Awards 2019, but we spoke with four of the nominees, including Andrade, before the show.

Andrade, for her part, has been the most successful ringcard girl in recent memory, winning in the category every year since 2016. Prior to that, Arianny Celeste and Brittney Palmer dominated. Andrade is more than just a ring girl however, appearing as a TV personality in her native Brazil, in particular on food related programming. It’s not just healthy living, however — “burgers, pizza, everything” Andrade told us Wednesday.

Bellator ring girl and nominee Mercedes Terrell, meanwhile, spoke about what goes on back stage with the girls — including “terrible stories about our love lives and everything else that our boyfriends, husbands or whatever don’t want the world to know about.” If you want a glimpse of that, Terrell suggested, you could hit up her Instagram Stories. Don’t worry, no one will blame you.

Fellow Bellator ring girl Summer Daniels gave the old “honor just to be nominated” speech, but we fully believe her. “Winning or not winning, in my heart I won, so that’s all that matters to me,” she told us before the show. As for what motivates her to strut her stuff round after round, “The people, the fans, they give me the confidence. There’s always the good and the bad, but the bad helps us become good.”

Finally, Invicta’s Jade Bryce (no nomination for Elias Theodorou?) discussed her podcast, The MAJic Hour, which she co-hosts with Mercedes Terrell. “It’s been awesome, we’ve done one MMA related episode a month. We don’t really talk about MMA or their training, we talk about their mindsets and what their life is outside the cage and outside of training. So it’s been cool to give that extra layer to the fighters.” 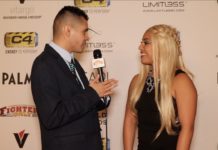 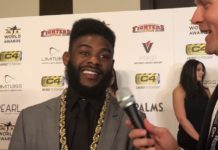 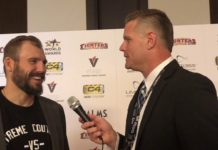