Former UFC featherweight and Cage Warriors champ Mads Burnell made his Bellator debut over the weekend. That came at Bellator 248, where the promotion became the first major organization to hold a sanctioned event in France. The Paris card was an impressive way to usher in the sport in the nation, and Burnell had the honor of partaking in the very first fight of the show.

“Of course, I could feel that there was a buzz in there,” Burnell (14-3) said of the atmosphere in the arena on Saturday, which held a limited number of fans due to coronavirus restriction. Speaking to media outlets including Cageside Press post-fight, the Danish fighter said of his debut that “it’s a great experience, being with Bellator.”

“First time in France, putting on a good performance. I had a great week, so I’m happy,” he added.

Talk surrounding the Paris event had focused on Bellator MMA’s continued growth in Europe. They have slowly built up a reputation as the most active major organization in Ireland and the U.K., and Italy as well. It seems like Paris is the next stronghold the promotion has secured, with promotion President Scott Coker confirming a return to the Accor Arena next year.

Coker also aired a desire to head to Amsterdam. Oliver Enkamp, who fought on the Paris card, has his hopes set on a Swedish event. Burnell, of course, would love to fight at home in Denmark.

Of course, the ongoing coronavirus pandemic is a factor. Patience is necessary. “One small step at a time. Eventually, it will come,” said Burnell. “If I keep performing and we get some more Danes in Bellator, why not? Of course the decision is not up to me, but it would be a dream come true if Bellator came to Denmark.” 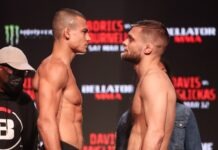