Bellator MMA became the first major organization to hold a sanctioned even in France over the weekend. And after being the first to the territory with Bellator Paris, promotion chief Scott Coker appears ready for more.

“Once we start actually going to cities and countries again and doing full events, we will expand to more cities in Asia,” said Coker, noting the promotion’s trip to Japan last year. “We’re definitely going to go back there, maybe next year, I don’t know about this year, but next year for sure. Korea, China, those are all markets we want to go to. And also Latin America. I think that Mexico, Brazil, Argentina, those are all great markets that we want to go into, and we do very well in our ratings over there. To me, it’s just a matter of time.”

Brazil had already been on the schedule for 2020, until the pandemic struck, he added.

Coker also highlighted the European series that Bellator has developed. It’s a model the organization would like to replicate. “I would like to do an Asian series after that, and in the same time, maybe do a Latin American series. We can have our fights going on in the U.S., and have all these sub-series going at the same time, and basically send all these fighters back and forth to make it interesting. But why not eventually do 50 fights a year, and maybe at the end of the day, you have your own mini-world cup tournament? That’s something that’s very interesting to me.”

Further expansion, including in Europe, depends on the COVID situation of course, Coker noted. A number of fighters, including Bellator 248 winners Oliver Enkamp and Mads Burnell, have expressed interest in fighting at home there. There were plans for Bellator to go back to Israel, Florence Italy, Newcastle England, and other locations in 2020. But right now, travel for Coker’s team is an issue. “It’s hard for them to even just enter a European country without really going through a lot of politics and red tape, and trying to get authorization and proper letters to travel to Europe,” he stated.

Which means the Mohegan Sun Arena in Connecticut will continue to be to go-to spot for 2020 and early 2021. The promotion returns there for its next event, Bellator 249.

“But listen, I would love to go to Amsterdam and throw a major fight there,” Bellator’s President added. “Especially with such great Dutch fighters, and such a history of great combat sports fighters in Holland and Amsterdam. So to me, we’ve got to go there. And the Nordics, great talent, another territory that we definitely want to go to. It’s just a matter of when it becomes a little more easier to travel and when it becomes a little easier to operate our business outside and actually do our touring model like we had done in the past.”

“It’s just going to be a matter of time. Because with COVID, eventually, this too shall pass,” predicted Coker. “And when it does, we’ll get back on the road and do it like we had been doing it before.” 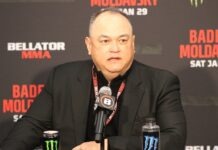