This week’s UFC Fight Island 5 card boasts six debuting fighters. The event, being headlined by Marlon Moraes against Cory Sandhagen in an important bantamweight bout, is simply awash in prospects. Also on the card are Edson Barboza, Ben Rothwell vs Marcin Tybura, the return of Thomas Almeida. Among the debuts is Russia’s Tagir Ulanbekov, going against Bruno Silva (10-5-2, 0-2 UFC) who is looking to get his first UFC win.

How will Ulanbekov fare in the UFC:

Ulanbekov is a well-equipped fighter who I think will do quite well in the UFC. On the feet, he is a decent counter striker which makes up for his relatively low output. He uses his kicks well, throwing a nice front kick and a roundhouse and also throwing them behind the jab.

Defensively, he stands upright making it easy for guys to grab a single leg and get the takedown. And although Ulanbekov is a good counter striker at the same time he struggles off his back foot.

Where Ulanbekov is best is when he can use his wrestling and get the fight grounded. I don’t rate his wrestling high but I think it’s good enough in certain fights. Ulanbekov is a tactical grappler who is content in one position but is always staying active with intelligent ground and pound. He’s shown time and time again that his back take is extremely good and he pulls it off perfectly in small transitions. A good flyweight fighter who may fall short due to some speed discrepancy and other defensive flaws.

How he matches up with Silva:

Silva has been an underwhelming fighter since coming to the UFC. In his two straight losses, he hasn’t really been able to get off any good offense. Like Ulanbekov, Silva is a grappler as well. Not only do I favor the wrestling of Ulanbekov but I think on the mat he’s significantly better. I like Ulanbekov for the win as I think he’s better everywhere. 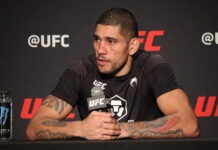