The octagon is back on Fight Island once again this week for UFC Fight Island 5. The main event, promising fireworks, features Marlon Moraes against Cory Sandhagen in an important bantamweight bout. Also on the card are Edson Barboza, Ben Rothwell vs Marcin Tybura, the return of Thomas Almeida, and a bounty of exciting debuts. In a bantamweight bout, Tracy Cortez (7-1 MMA, 1-0 UFC) was taking on Bea Malecki. Now that Bea is out, Cortez will be fighting the debuting Stephanie Egger.

How will Egger fare in the UFC:

Egger has two solid wins on her record against Mara Borella and Reina Miura. She’s a judo black belt and an ADCC competitor who won the European Trial in 2019 at 60kg. Egger as expected wants to close the distance and get the fight to the mat. With good judo, she has a strong body lock she gets the takedown with. I’m not a fan of the way she closes the distance coming straight forward and not striking her way in or cutting angels. She doesn’t have a lot to offer on the feet, and although she does throw alright volume, she’s sloppy. It’s basically striking you would expect from a Judo practitioner/Grappler. Once Egger gets the fight to the mat she has a strong top position, good ground and pound, and submits girls as well. Compared to her fight in Invicta almost four years ago, she’s looked much better. Being one-dimensional just wanting the fight on mat, however, I don’t see a lot going for her. She’s already 32-years-old so her ceiling is pretty low.

How she matches up with Cortez:

What Egger has going for her in this fight is that she is the bigger, stronger fighter. She’s three inches taller than Cortez and has a longer reach. Egger is going to have to deal with the aggression and forward pressure from Cortez. Cortez will indeed wrestle in this fight and that may play into Eggers’ favor. Eggers has still never fought someone with good wrestling and someone who isn’t going stop working. Cortez will likely be just too much for Egger. 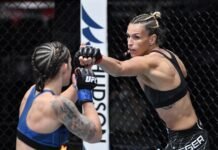 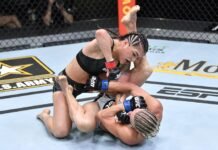