After a good stint in Las Vegas, the UFC is going back to Fight Island, hosted in Abu Dubai, this weekend. It will be the second run on what is actually Yas Island after a successful first run in July. And the first card back is a big one, as the promotion will kick off it’s second Fight Island run with UFC 253. The PPV card is headlined by middleweight champ Israel Adesanya defending his title against Paulo Costa. In the co-main event, it’s Jan Blachowicz vs Dominick Reyes for the vacant light heavyweight title. Also on the card, there are a number of debuts including that Ľudovít Klein. He will be taking on City Kickboxing’s Shane Young (13-4 MMA, 2-1 UFC). Young was originally supposed to take on Nate Landwehr but he had to pull out after testing positive for COVID-19.

How will Klein fare in the UFC:

Klein is an excellent prospect who I think can do some real damage in the featherweight division. In the past, his takedown defense needed some work. Now, he has a lot of resistance along with good cardio. A lot of times when Klein gets top position, it’s actually because he’s so good at defending the initial shot from his opponent, and uses his strong hips to get on top. But even off his back, Klein has stellar jiu-jitsu. Along with strong hips he also has fluid hip movement, throwing up submissions and always getting back upright.

Although Klein’s last few fights have showcased his stand up, he’s a top notch grappler. Klein is continuously posturing up to land big ground and pound, including sharp elbows he clearly loves to throw. He’s not someone you want to give up a bad position to or just take a break against, because he will submit you very quickly.

On the feet, I will say Klein gets a bit wild coming forward, throwing a bit sloppy at times. He’s much better sitting back picking opponents apart with kicks, and will catch you coming in with his hands. His go-to weapon has been a head kick he’s finished with a few times in his career. Klein sets it up beautifully disguising it behind punches. Also, Klein does a nice job kicking the legs frequently before going to the other side and going up high. Some major technique, power, and speed rest in the kickboxing of Klein. Outside of that he’ll throw a good jab at times and has a very nice one-two he throws right down the middle. Not as good with his hands as he is with his kicks but he is still technical and accurate when he throws. The dude is a problem for a lot of fighters.

How he matches up with Young:

Young is an aggressive fighter who will walk opponents down biting on his mouth piece and throwing a lot of volume. The problem is Klein is a sniper and is completely capable of catching Young coming in. Klein is the much more technical fighter and is a lot faster which is going to be key in this fight. Grappling-wise Klein is better everywhere. It depends on how the pressure of Young will effect Klein. Klein has already shown to be a good counter striker so I think he will fare well with everything Young throws at him. Klein did miss weight Friday, but Young has been out well over a year. 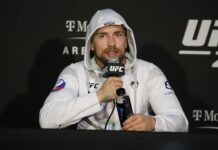