While the finish had its share of controversy, Michel Pereira was on route to a win either way at UFC Vegas 9.

Fighting out his contract at UFC Vegas 9 was Michel Pereira, the flashy, acrobatic striker who had dazzled fans since joining the promotion last year.

The only problem, through three fights, Pereira had a 1-2 record, though thanks in part to a DQ loss (illegal knee) against Diego Sanchez in his last fight. A fight he had otherwise been dominating. For what was clearly the most important bout of his UFC career, Pereira was matched up with Zelim Imadaev — a fighter who would no doubt be happy to stand toe-to-toe with the Brazilian.

Out of the gate we saw a more reserved Michel Pereira. A few front kicks and some jabs dotted the early landscape of the fight before he began to unleash on some overhands that stung Imadaev. As Imadaev got more comfortable and moved forward, Pereira pushed off of the cage and landed a superman punch followed by a big knee. That opened the flood gates for more craziness, which included an attempted showtime kick among other things. He returned to simplicity with a doubled up jab followed by a big right hand to the temple that dropped Imadaev. The round opening ended with another superman punch off the cage and some Pereira dance moves.

Michel Pereira back to his usual antics 🕺 #UFCVegas9 pic.twitter.com/fwItI0pTgU

Pereira backed Imadaev up immediately to start the second, but was hit with a solid counter, which forced him to respect the hands of the Russian. That respect only lasted so long though, and Pereira mixed in a somersault kick that couldn’t have missed by much more. Pereira got back to work with more big right hands and knees in the occasional clinch. A late exchange saw both men swinging at the end of the round, but Imadaev could not land much in either of the first two rounds.

More jabs and a straight to the body started round three for Pereira. He ripped combinations off with little regard for Imadaev’s returns. “Demolidor” landed another super man punch that appeared to stun Imadaev. Pereira even worked in an open hand slap to the face of Imadaev. After a brief dance routine, Pereira added another straight right hand that snapped the head of his opponent back. After some showmanship, Pereira got in on a suplex and jumped his opponent’s back for a rear naked choke. Referee Chris Tognoni stopped the fight for what appeared to be a tap, but there was certainly some debate about it. While it might have changed the official method of victory, it didn’t change the victor in a fight that was all Pereira.

"I want the BMF belt! Jorge Masvidal, beware, you are next!" @UFCPereira with an interesting call out 🗣️#UFCVegas9 pic.twitter.com/Ny3lbjBteC

Post-fight, Jorge Masvidal was the target of a call-out by Pereira. Which is the fight we didn’t know we wanted, but do. 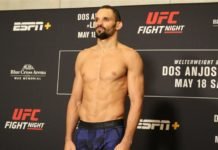