Georgian MMA continues to rise, with the latest fighter from the Eastern European nation looking to break out being Zviad Lazishvili.

With countrymen Merab Dvalishvili, Giga Chikadze, Roman Dolidze, and Liana Jojua in the UFC, Lazishvili, who was 12-0 entering LFA 90 on Friday, looks primed to join them. Paired up with another undefeated fighter in Ricky Steele, who was 6-0 to start the night, 28-year old had a chance to claim bantamweight gold. He did just that.

It took the Georgian fighter all of three minutes and forty-two seconds to seal the deal, submitting Steele via rear-naked choke and improving to 13-0. The finish came after Steele fought off the choke several times — but the dogged, determined Lazishvili never let up.

Full results from Friday night’s card are available below. 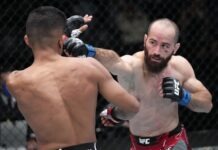 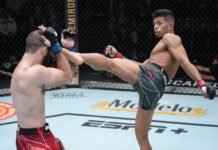