Canadian Charles Jourdain could be taking a trip to Fight Island later this fall.

Jourdain (10-3) is being paired up with Josh Culibao (8-1) for a featherweight scrap on the UFC’s October 3 card. While no location for the event, or any of the promotion’s cards in October, has been officially announced, it is widely expected that the card will take place on Yas Island in Abu Dhabi. A.k.a. “Fight Island,” where the promotion spent the entire month of July.

Cageside Press confirmed the booking following an initial report by MMA Junkie. The UFC has not yet officially announced the pairing.

Jourdain, a former double champion (lightweight and featherweight) in TKO, is 1-2 in the UFC to date. He made his debut at UFC Rochester in May 2019, losing a unanimous decision to Des Green in a lightweight contest. “Air” Jourdain then dropped to 145lbs, defeating Doo-Ho Choi at home in South Korea in something of an upset at UFC Busan.

Culibao, meanwhile, will be looking to bounce back from a loss to Jalin Turner back in February, which became the first blemish on his otherwise perfect record. Culibao took that fight on short notice.

The UFC’s October 3 card is expected to be headlined by Irene Aldana vs. Holly Holm, a fight originally scheduled for the beginning of August. However, Aldana contracted COVID-19, forcing the card to be pushed back.

The following bouts are currently attached to the event: 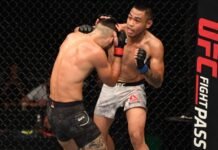 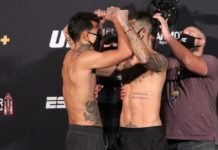