Hannah Cifers found herself with her back to the wall heading into UFC Vegas 8. Her fight Saturday against Mallory Martin had Cifers badly in need of a win, after losing three straight fights in 2020, two of which had come during the pandemic. Those losses, to Angela Hill, Mackenzie Dern, and Mariya Agapova had Cifers in danger of losing her spot in the roster, quite frankly.

Martin, meanwhile, was competing for the first time since December, when she suffered her first defeat in the UFC at the hands of Virna Jandiroba.

Near the midway mark of the round, things took a huge turn. “Shockwave” Cifers dropped Martin with a huge right hand! Martin hit the deck, Cifers went in after her, then with Martin closing her guard, Cifers picked her up and slammed her! Martin made it back up, but Cifers was all over her, peppering her with shots and rocking her with a right hand again. Martin would end up pulling guard just to survive, and was slammed again for her troubles. While Mallory Martin survived the round, heading into the second, she was definitely in danger.

With that in mind, Martin played it smart in round two. She got the fight down early, got on top, and moved to mount, working over Cifers as she did. Cifers was bloodied, eating elbows, and gave up her back. Martin locked in the rear-naked choke, forced the tap, and let out a scream of relief having survived a near-finish to come back and get the submission win.

A tough end for Cifers, who was so dominant early. On the other hand, just a huge comeback win for Mallory Martin, who adjusted well and overcame a ton of adversity. 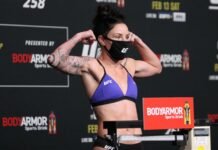