Fresh off a Contender Series win over LFA strawweight champ Vanessa Demopoulos, 21-year old Cory McKenna is wasting no time getting back to work. And she’ll be facing another hot 21-year old prospect when she does: Kay Hansen.

UFC officials announced the booking earlier this week, during the latest installment of Dana White’s Contender Series. Given the age of these two prospects and the high ceiling for each, the fight should be one to keep an eye on.

Hansen (7-3) has been competing as a pro since 2017, and became something of a teenage sensation for Invicta FC. She’s currently on a three-fight win streak, capped off by a victory over former Invicta atomweight champ Jinh Yu Frey at UFC on ESPN 12 back in June.

A strong finisher, Hansen has earned stoppages in six of her seven wins, with a mixture of TKOs and submissions. Her debut against Frey earned her a Performance of the Night bonus.

McKenna (5-1) has also won three straight. Prior to winning a UFC deal on the Contender Series, she had fought the entirety of her pro career for British promotion Cage Warriors. 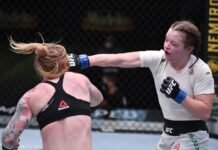