The Bellator 244 weigh-ins went down earlier today in Uncasville, Connecticut, with one fighter coming in heavy. The third pandemic-era card for Scott Coker and company sees Ryan Bader defending his light heavyweight title against Vadim Nemkov. Both fighters actually came in under championship weight, making the main event official. It was the co-main event that had some trouble, meanwhile.

The women’s featherweight bout between Julia Budd and Jessy Miele hit a snag when Miele came in one pound over the non-title limit. It will go forward at a catchweight. Miele was the lone fighter on the card to miss weight; the remaining catchweight bouts were contracted ahead of time. 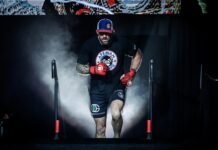