“Slippery Pete” was in action at UFC Vegas 6. That would be Peter Barrett, the last of the 2019 crop of Contender Series winners to make his debut inside the octagon.

Barrett was supposed to fight Danny Henry back in April, but as so many fights did around that time, that one fell through. Then, he was booked on the August 8 card against Steve Garcia in a featherweight bout. The date held, the opponent did not. Instead, Barrett threw down with the always dangerous Youssef Zalal on Saturday.

Zalal, an LFA alum, had won three straight to enter the night, including two inside the Octagon.

Right out of the gate, Zalal landed a beautiful spinning kick that knocked Barrett down. Zalal jumped on top and started punching away. Barrett desperately grabbed for a single-leg and was able to use that to stand up and survive. Zalal caught Barrett with a stiff right hand, then Barrett landed a jumping knee. Early on, the speed of Zalal was evident, dancing around the cage with Barrett in the middle. Barrett landed a left straight and clinched up against the cage and attempted to grind away at Zalal. He looked for a suplex takedown, but his hands slipped up the body of Zalal. Another jumping knee landed for Barrett, then he caught Zalal with a head kick a bit before the end of the round.

📺 Watch it live on ESPN+ pic.twitter.com/ri2vZ0bGs8

A fiery exchange started round two, then a leg kick led to a clinch battle. Zalal used the opportunity to throw Barrett to the canvas. Zalal took the back of Barrett then began working on a rear-naked choke. Barrett stood up and tried to shake him off, but was dragged down. The same cycle happened once more, but Zalal just wasn’t able to finish the fight.

Zalal opened the final round with a leg kick and a head kick that Barrett walked right through. Barrett forced a clinch and got a brief takedown. Zalal worked his way up along the fence then broke free. A combo landed for Zalal, then he brought the fight to the ground. Zalal began working for an arm triangle choke, but Barrett broke free then stood up. Not long after, Zalal hit a single-leg takedown. Barrett tried to spin off his back, but nearly gave up his back and conceded mount. Barrett eventually gave up his back and Zalal went for another rear-naked choke. Barrett stood up, bucked him off, then ate a few upkicks as time expired. 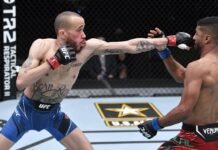 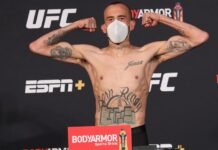