Michael Chandler and Benson Henderson, when you get down to it, walked two very different paths to arrive at Bellator 243 on Friday night.

Chandler has long been the poster boy for the Viacom-backed promotion. Dating back to his first bout against Eddie Alvarez, which saw Chandler claim the promotion’s 155lb title for the first time. Alvarez was already the “Underground King,” Chandler seen almost as a usurper at first glance. But after tireless effort and repeated standout performances, he emerged as the face of the promotion. Even after losing his title, reclaiming it, then following that pattern a second time.

The three-time Bellator champ first met former UFC lightweight champ Benson Henderson in 2016. “Smooth” at the time was a big signing for Bellator, but one that has since taken a back seat to the likes of Ryan Bader and Cris Cyborg. After two title fight losses — at both welterweight and lightweight — Henderson was seen as on the downside of his career.

Then, he rattled off four straight wins, leading him back to Chandler, with the winner close to a lock for the next lightweight title shot (Chandler’s contract status not withstanding).

Someone was looking to make a statement Friday. Henderson made his case first, opening up with some strong kicks to the body. “Smooth” had promised a quicker start ahead of the rematch, and through the opening couple of minutes, he’d delivered. Chandler still had his own kicks going, then a combination, a 1-2. And just as suddenly as he’d got going, Chandler ended the fight. A left hand to the chin, trailing a jab, put Benson Henderson down. Another right glanced off the dome of Henderson’s skull, but he was already out of it.

After five rounds of extremely close action in their first fight, Michael Chandler had the win in just over two minutes in their second.

It cannot be overstated what a massive victory Friday night was for Chandler. He now heads to free agency off a win over a former UFC champion who had only been knocked out once before. His loss to Patricio Pitbull in the rear view mirror, there’s a big question of whether he becomes the next Bellator champion to move to the UFC — though he put Bellator CEO Scott Coker on notice post-fight, telling him to get a deal done. 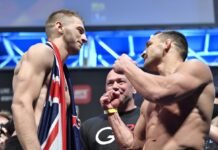 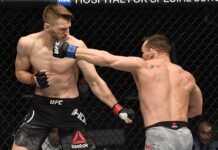