Heavyweight being what it is, a couple of losses don’t constitute a career-killer. Look no further than Andrei Arlovski or Mark Hunt for proof of that. So Matt Mitrione having lost two (with a no contest in between) wasn’t cause for too much doom and gloom. However, he was certainly looking to get back in the win column at Bellator 243 against Tim Johnson on Friday.

Johnson, like Mitrione a UFC ex-pat, had snapped his own skid recently by finishing highly touted prospect Tyrell Fortune. A second straight victory, over a name like Mitrione, would no doubt set him up for bigger things in the division.

As an extra wrinkle, both fighters were southpaw for this one. And on the first real exchange, an accidental clash of heads preceded Mitrione slipping and landing on his back. Johnson went to side control, landing some punches to the body. Dry, and a lot of time on the clock. Not a good combination for “Meathead.” Johnson then transitioned to landing some big punches, and controlled from the back as Mitrione worked his way to the fence and struggled to make it to his feet.

He never got there. Thunderous punches rained down, the fists of Johnson connecting time and again as Mitrione covered up. Enough slipped through his defenses for ref Mike Beltran to wave it off. Just like that, Johnson was rejuvenated in Bellator’s heavyweight division. Mitrione, meanwhile, goes back to the drawing board.

So what’s next for Johnson? With two straight stoppages, a step up. Or a rematch, as Johnson has campaigned for a second chance against Cheick Kongo. 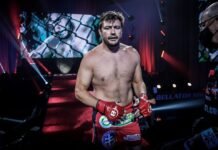 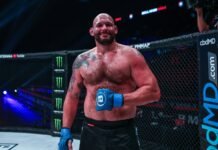 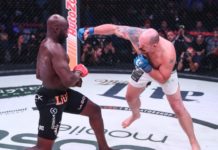