Nurmagomedov and Gaethje, the interim 155-pound champion of the UFC, will headline the UFC 254 pay-per-view (PPV) on October 24. Recently, UFC commentator Joe Rogan shared a video of “The Highlight” and coach Trevor Whitman getting in a training session at his gym. Nurmagomedov decided to leave a comment on Rogan’s post, sending a warning to his upcoming foe.

“Justin is a very nice guy and good opponent for me, but when octagon close he have to be ready not only boxing match, I’m not Dustin or Tony. I will take him to the deepest ocean and drown him InshaAllah.”

Awesome morning at the studio where I had the privilege of seeing the savage @justin_gaethje and the master Trevor Whitman of @onxlabs put in work! Thank you also to my brother @yacoubianmuaythai for the awesome training session!

Gaethje captured the interim 155-pound title back in October with a fifth-round TKO win over Tony Ferguson. The victory marked the American’s fourth in a row. Now, he’ll get the chance to become the first and only man to have defeated Nurmagomedov in mixed martial arts (MMA) competition. As for Nurmagomedov, he is currently dealing with the loss of his father, Abdulmanap, who recently passed away due to COVID-19 complications. The lightweight champion is 28-0 in his MMA career, coming off a successful title defense over Dustin Poirier last September.

Nurmagomedov is expected to retire from MMA competition upon hitting the 30-0 milestone, per his father’s wishes. A win over Gaethje brings him that much closer to accomplishing that goal. UFC 254 takes place live on PPV on October 24, 2020, from a location yet to be announced. 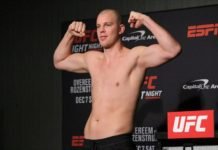 UFC Vegas 11: Khamzat Chimaev Ready for Everyone from Maia to Lesnar, Not Interested...