Shogun Rua made it 3-0 against Antonio Rogerio Nogueira on Saturday night at UFC Fight Island 3. In what was Minotouro’s retirement bout, Rua (27-11) picked up a split decision win. It was a hard-fought contest, with both men landing plenty. Shogun’s arsenal was a little more varied, however. Mixing in kicks and takedowns likely gave him the edge.

With so much talk surround Nogueira’s retirement, it’s easy to forget that at 38 and following years of wars, Rua is coming to the end of his road as well. Asked about his next fight, Rua said that it hadn’t crossed his mind just yet.

“I’m [going] back to Brazil now. I miss my family. I’m going to relax,” he said during the post-fight press conference.

When it comes to retirement, “I want two, or one more fights,” he stated. Yesterday, it was three, he added. One down. “Now, I think [I have] two more fights, and I’m finished.”

While Shogun originally said he had nothing in mind in terms of an opponent, there is one idea that stands out. That would be Paul Craig. The pair fought to a draw back in November, at UFC Sao Paulo. A split draw, in a fight that many felt Shogun Rua won. Craig himself has campaigned for a rematch. That’s an idea that Rua welcomes.

“Yes, this is an option. I want this fight too,” he said backstage on Saturday. 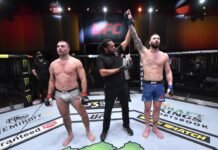 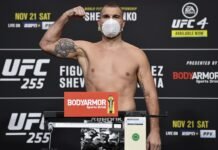