Only one fighter failed to make weight for UFC Fight Island 3 on Saturday: Francisco Trinaldo. For the first time in his UFC career, the Brazilian lightweight came in heavy. Whether that would have any effect on his fight against promotional newcomer Jai Herbert remained to be seen, but it was certainly something to keep an eye on.

At the beginning of the fight, Jai Herbert was bouncing, light on his feet. He snuck in a straight right forcing Trianaldo to press Herbert against the cage. Trinaldo tripped Herbert to the mat. Trinaldo then attempted a front choke but that allowed Herbert to get up — but not for long as Trinaldo put him right down on his back. Herbert again got back to his feet and landed a knee off the break. Herbert actually ended the round on top after defending a takedown from Trinaldo.

Right off the bat in round two Herbert dropped Trinaldo with a lightning-quick right cross. Herbert, besides letting Trinaldo back up, played into the grappling game. Herbert did take the back, hooks in, and threatened with a rear-naked choke. Francisco Trinaldo would escape and get back to his feet, however. Herbert, still loose and landing, fired a knee and found a home for his right hand buckling Trinaldo. The round ended on the feet with the momentum on Jai’s side.

That didn’t last. In the final round of the fight, Jai was still fresh, bouncing around and picking his shots. Out of nowhere, Trinaldo landed an overhand left knocking Herbert out cold. His head hit the mat, and Trinaldo, a classy veteran, hesitated, knowing it was over. Ref Herb Dean stepped in and decided it wasn’t over, however. With Herbert dazed he essentially waited for Trinaldo to throw a few more half-hearted strikes before finally calling the fight.

Not a great look from the usually reliable Herb Dean. Following the bout, Trinaldo gave notice that he’d be moving on up to 170lbs, naming Mike Perry and Donald Cerrone as opponents he would be interested in. 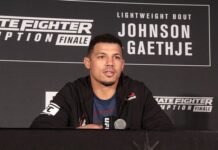