Sergey Spivak picked up his second win inside the octagon at UFC Fight Island 2. A hotly contested bout against Brazilian newcomer Carlos Felipe saw the fight shift more and more in Spivak’s favor as the night went on. By the third frame, Spivak was in full control, softening Felipe up. In the end, Spivak had done enough to take a 10-8 in the third round on all three scorecards — although that only gave him a majority decision.

Following the results being read, things got a little heated, mainly on Felipe’s side. A bit of in-cage commotion before cooler heads prevailed. During the virtual post-fight press scrum afterwards, Spivak (11-2) told Cageside Press that “I know he was going to go to talk to me, because he was aggressive at the staredown. It is what it is. It was a fight, it doesn’t really matter. He can talk, but I got the W. That’s about it.”

That said, Spivak was clearly not a fan of his opponent’s antics. He’d later add “I respect him as a fighter, he’s a tough fighter. But as a person, I don’t really like him much.”

Asked if he was surprised by the fight being declared a majority decision, “The Polar Bear” responded that he would have preferred to avoid the judges entirely. “I don’t really like to leave it to the judges’ decision. I like to finish my opponents. I knew that I took the third round, and I felt like the first and second were equal.”

The game plan, he added, had been to take Felipe into deep waters. Or, as Spivak put it, “I kind of wanted to give him a chance to talk because he likes to talk, so I decided to give him a chance to show what he can do.” For those paying attention, Felipe is a fighter who likes to jaw at his opponents. Constantly. “His strikes, I didn’t really feel them, Spivak added. “He talked, but in the later rounds, I showed what I can do, and I won the fight.” 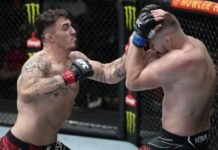