It was a fun five minutes between debuting fighters Modestas Bukauskas and Andreas Michailidis at UFC Fight Island 1, and the bout ended in between rounds.

A pair of promotional newcomers in Modestas Bukauskas and Andreas Michailidis faced off on the UFC Fight Island 1 preliminary card. The light heavyweight pairing saw Greece’s Michailidis enter on a three-fight win streak, while Lithuania’s Bukauskas had won six straight.

Both guys started the fight trading kicks as both guys looked real comfortable from their range. Michailidis started to mix it up better, landing a kick to the body and ripping a left hook to the body. Michailidis controlled the center of the cage and continued to chop the lead leg of the taller man in Bukauskas. Michailidis was just the much faster fighter early on firing quick combos and catching Bukauskas coming in. At the final seconds of the round Michailidis worked heavy on a takedown and Bukauskas landed a few elbows to the side of the head at the bell. The shots were so significant that the ref called the fight after the bell rung.

🇱🇹 @ModestasBukaus1's elbows end the night as Michailidis fails to make it to the corner.

It looked like in between rounds, Michailidis attempted to sit against the cage, but the door was open and he lost balance. The referee stopped the fight and the fighter did not protest.

Afterward, Bukauskas explained that he was happy to not face a wrestler and that winning in the UFC was a dream come true. Not only did he win, but he became the first Lithuanian-born fighter to win inside the Octagon.

Modestas Bukauskas def. Andreas Michailidis via TKO (Elbows) in Round 1 (5:00) 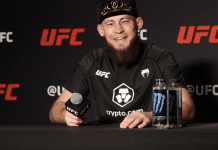 UFC Vegas 56: Rinat Fakhretdinov Struggled To Get Into US, Promises Vast Improvement 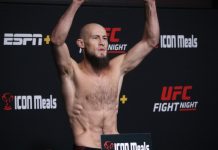 Welcome to the UFC: Rinat Fakhretdinov