The UFC’s next PPV event, UFC 252 in August, has an unexpected addition.

During the broadcast of UFC 251 on “Fight Island” on Saturday night, the promotion announced that Frankie Edgar vs. Pedro Munhoz will join the PPV event. The bout was originally scheduled for UFC 251 itself, then pushed back a week, to the third of four Fight Island cards in Yas Island, Abu Dhabi.

However, a positive COVID-19 test for Munhoz resulted in the fight being scrapped from that date. Despite reports of the UFC looking for a new opponent for Edgar, it appears the duo is staying intact. And they’re back on a PPV, assuming no further obstacles arise.

Edgar (23-8-1) will be making his bantamweight debut in the fight. That’s a move that was expected to take place earlier this year, against Corey Sandhagen. However, in December, Edgar was called upon to replace Brian Ortega at UFC Busan against the Korean Zombie. Edgar jumped into that featherweight main event, forestalling his 135lb debut in the process. That fight in Busan, however, did not go his way. He lost the fight, via TKO in the opening round.

The former lightweight champ will meet Munhoz (18-4, 1NC) as he looks to bounce back from a loss to Aljamain Sterling at UFC 238. That will mean over a year outside the octagon for “The Young Punisher,” who had won three straight prior to the Sterling fight. 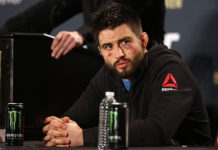 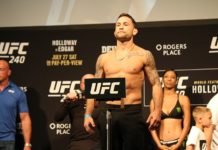