Muslim Salikhov was able to edge out a split decision win over Elizeu Zaleski dos Santos at welterweight on the UFC 251 prelims.

Welterweight action at UFC 251 had Brazil’s Elizeu Zaleski dos Santos taking on Muslim Salikhov. Zaleski dos Santos was aiming to make it two wins in a row on Fight Island, while Salikhov was looking to build on a four-fight win streak. The first round began with a leg kick from Salikhov. Salikhov landed a kick to the body, just blocked a head kick, and returned fire with yet another leg kick.

Dos Santos was able to sneak in a jab during a blitz. Salikhov jumped inside with a combination and just had a spinning kick blocked at the end of it. A nice lead left hook connected for Salikhov which seemed to wobble Dos Santos slightly. A takedown attempt from Dos Santos was stuffed by Salikhov, who ate a few knees to the gut inside the clinch. Dos Santos stunned Salikhov with a nice shot before unleashing a swarm of ground-and-pound as the horn rang.

Round two kicked off with some nice shots connecting from dos Santos. Salikhov fired back with a stiff jab that made dos Santos stubble backward. Salikhov caught a spinning kick from dos Santos and threw him to the floor, but allowed him to stand up again. Dos Santos responded with a hard shot that dropped Salikhov, but Salikhov turned it into a scramble. After separating from a clinch, Salikhov catches dos Santos with a nice counter left. Some really flashy kick attempts from Salikhov but none of them were able to connect as the round ended.

In the third round, Salikhov landed a spinning back kick that was just blocked. Dos Santos was able to connect on a big left hand, but Salikhov made him pay with a combination in response. Salikhov connected with a big right hand and continued to walk dos Santos down. The round came to an end. 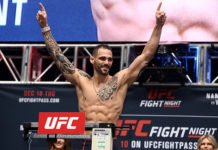