Starting in 2021, the UFC will have a new official, exclusive outfitting partner: Venum.

The apparel company, who have sponsored fighters like Lyoto Machida, Fabricio Werdum, and Carlos Condit, was revealed as the heir apparent to Reebok in a press release Friday.

“We’re pumped that VENUM will be joining us as our new exclusive global outfitting and apparel partner,” said UFC President Dana White [in Friday’s press release]. “VENUM is an Iconic combat sports brand that understands the unique needs of MMA athletes. Franck Dupuis and his team at VENUM have the technical knowledge and experience that will produce world-class UFC Fight Kits and apparel. We’re looking forward to collaborating with them on this next evolution of UFC’s outfitting program.”

The deal will kick in as of April 2021. Until that point, Reebok will remain as the official outfitter of the UFC. As part of Friday’s announcement, the promotion stated that “UFC will adjust the pay scale tied to its Promotional Guidelines Compliance program, which will result in across the board increases for all athletes effective April 2021.”

No specifics on how much of an increase fighters can expect were announced.

The Reebok deal came into effect in 2014, instantly wiping out sponsorship money for athletes in favor of outfitting pay for fighters, based on tenure with the promotion, among other factors. That led to a number of high profile fighters voicing their displeasure, and in some cases leaving the promotion in favor of rivals who still allowed for individual sponsorships.

Reebok will also “continue to serve as the official footwear provider of UFC through the end of next calendar year.”

“We appreciate the partnership with Reebok over the past six years. It was a groundbreaking deal that elevated both of our brands. We’re pleased that Reebok will continue with us as the official footwear provider of UFC through 2021,” White was quoted as saying. 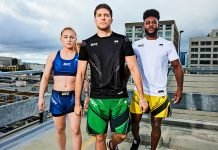