UFC Octagon Girl Arianny Celeste announced on Tuesday that she is pregnant with her first child and shared her maternity photos with Us Weekly.

UFC Octagon Girl Arianny Celeste announced on Tuesday morning that she is pregnant with her first child.  Sharing the first photos with Us Weekly, Celeste revealed that her child with boyfriend Taylor King is due on September 28.  She further said that she does not yet know if she is having a boy or girl.

My greatest chapter has begun and I’m so happy to finally share it with you. ❤️ https://t.co/BIKhcAZpnZ pic.twitter.com/sLY4jO1Vt6

Celeste, 34, told Us Weekly about finding out, “My mom for some reason asked me to take a pregnancy test. [Moms] always seem to know. I went to the store and got two tests and sure enough, I was pregnant. I couldn’t wait, so I called my boyfriend immediately even though he was working at the time.”

Since finding out, Celeste said that she has been been doing extensive reading, “…From what to eat, how to sleep train and hypnobirthing, I want to be as informed as possible to have a harmonious journey with my baby. I’m determined to focus on the wonderful [and] empowering experience of birthing life to my first child.”

Celeste debuted with the UFC in 2006 and since then been a mainstay of events.  As the UFC exploded in popularity over the years, so did Celeste’s profile as she appeared in magazines such as Playboy, Maxim, and FHM.  A consistent part of major UFC events, Celeste’s likeness has extended to being part of the UFC video games and she has been voted the Ring Girl of the Year at the World MMA Awards a record six times.  Outside of the Octagon, Celeste has worked as the co-host of the TLC show Overhaulin and is the founder of Girlfriend Box, a subscription box service aimed at men looking to buy gifts for their girlfriends.  Celeste was last seen working UFC 248 in March. 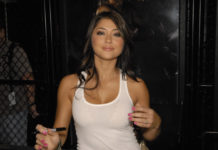