The UFC along with BT Sport has released a trailer for its upcoming Fight Island shows. And not everything is peace and tranquility on the island.

In a nod to any number of horror movie trailers, the first big promotional push for Fight Island opens with an island-themed track, “Gentle Wind,” and scenes of a tropical paradise. That’s before it has Darren Till show up as a beastie with glowing eyes and fangs.

“Legend spoke of an island where only the strong will survive,” the trailer reads, while shots of Max Holloway roaring and the key players from next month’s shows are featured.

“Fight Island” of course is actually Yas Island in Abu Dhabi. The promotion is running four shows there in July, starting with UFC 251 on July 11. That’s the date that would have been the UFC’s International Fight Week show, and it will feature three title fights: Kamaru Usman vs. Gilbert Burns (welterweight), Alexander Volkanovski vs. Max Holloway (featherweight), and Jose Aldo vs. Petr Yan (bantamweight).

Fight Night events will follow on July 15, 18, and 25. Former middleweight champ Robert Whittaker will headline the July 25 card against Darren Till.

While the Fight Island shows are essentially an end run around travel bans established due to the coronavirus pandemic, strict safety protocols have been put in place to keep athletes and event staff safe. Fighters and their teams will undergo several COVID-19 tests both prior to departure and after arrival on the island. An approximately ten square mile safety zone has been set up around the island, with no unauthorized personnel going in or out.

That’s a step up from the protocols established for the UFC’s Florida and Nevada shows.

If you recognize that “Gentle Wind” track from the trailer, it previously popped up in a Doritos commercial in 2017. The track’s composition is credited to Rob Laufer, who has worked with Frank Black, Fiona Apple, Cheap Trick, and others.

UFC to Return to Fight Island Officially for Five Weeks 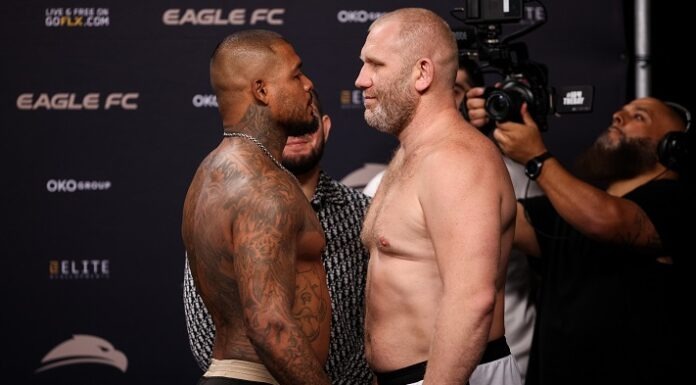