Undefeated on the regional circuit, middleweight Kyle Daukaus is ready for his close-up.

It will come this weekend at UFC on ESPN 12. Daukaus (9-0) is stepping in for Ian Heinisch against Brendan Allen, a fighter he always expected to cross paths with. “I’ve always had my eye on him,” he admitted at the event’s media day on Thursday.

This Fight Week, the media duties and everything that comes with it, “feels familiar,” he said. “I’ve always envisioned myself here. So it feels like second nature. It feels like home.”

Despite taking the bout against Allen on short notice, Daukaus has managed to get a camp in. “I actually had word of a fight for later this summer, but I wasn’t allowed to announce anything,” he revealed. “So I was training for that fight, and it just so happened that this call came earlier.”

He’s also managed not to let himself be distracted by the civil unrest that has been ongoing in the U.S. for weeks. A big part of that seems to be avoiding “social” media.

“None of that stuff bothers me. I really stayed off Facebook and all the social media platforms. I stayed away from all that political stuff,” Daukaus told Cageside Press. “Because I just think it’s bad mentally, and physically. It brings a lot of aggression towards each other, and it’s just not good in the world.”

It’s not just politics either. “I think social media is kind of a gateway for people to talk smack, and run their mouth, and just be behind the keyboard,” continued Daukaus. “I’ve never really been a social media person, but during this call [to fight], I’ve had to get back on social media and really push it. But I’m sticking to just Twitter and Instagram, I’m staying off of Facebook, because I’m not a big fan of Facebook.”

Watch the full UFC on ESPN 12 media day scrum with Kyle Daukaus above. 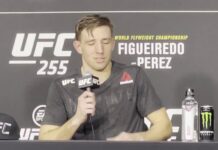 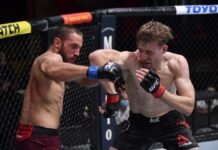