When the UFC returns to the Apex this weekend for UFC on ESPN 12, it will be a card headlined by Dan Hooker and Dustin Poitier in an important lightweight bout. Other notable fighters on the card are Mike Perry, Aspen Ladd, Sara McMann, and Luis Pena. As has also been the case of late, there are also plenty of debuting fighters on the docket.

How will Hansen fare in the UFC:

Kay Hansen will be a problem in the UFC, and is someone I think will no doubt break the top 15 at some point in her career. She is a wrestler first but she has been working extensively on her hands even taking five professional boxing fights. Hansen still relies on her wrestling more and she should because she no doubt knows what she’s doing. She’s always coming forward initiating the clinch. She has the strength to just bully girls to the mat but will utilize trips as well. Hansen is an excellent wrestler changing level grabbing a single leg or getting the double leg and dumping her opponent to the mat. Her wrestling IQ is definitely there knowing her position, when to change levels, and most importantly completing the takedowns.

Hansen has some top-notch grappling and is a skilled submission artist with half her wins by sub. She’s such a workhorse on top always softening up her opponent with ground and pound and out of nowhere will go for the arm-bar or grab that neck. Hansen is a fighter that is always in the fight and always looking for the finish, proving that with four third-round finishes. Her wrestling is good, her cardio is solid, her grit is there, she’s just what you want in a young fighter. Her losses are by her just getting out-positioned and somewhat out-grappled but despite her TKO loss she was very much looking good even in defeat.

How will Frey fare in the UFC:

Jinh Yu Frey is a talented fighter but is very frustrating to watch. She has the power and has good hands but never seems to commit to anything. She will most of the time throw single strikes as she lacks big-time on output. She’s a patient fighter, being a counter-striker mainly with her left hand. Frey is solid in the clinch where she is very strong and frames and rips elbows very well. She throws good kicks but hardly does anything with them. Frey will use her wrestling every once in a while. When she does, she times her opponent coming in and uses their momentum to take them down.

Once on the mat, Frey has decent ground and pound but her jiu-jitsu isn’t really threatening. Defensively she is the counter-striker, but she gets countered herself quite often. She’s usually beaten to the punch not reacting quick enough. In space Frey can be taken down but in the clinch against the cage shes really good fighting under-hooks and circling out. At 35-years-old I don’t think she’s gonna it’s doubtful she’ll have the time to make any waves in the UFC.

How do Hansen and Frey match up:

Frey is a difficult style match up for Hansen. Hansen will no doubt want wrestle but Frey has some pretty good takedown defense. And the forward pressure from Hansen could allow the counter striking of Frey to come into play. With that said Frey hasn’t fought a pressure wrestler like Hansen and I believe she could outwork Frey. It’s likely that Hansen can take anything thrown from Frey as she’s shown to be super tough throughout her career. On the feet, Frey may be more dangerous but her lack of output and the aggressiveness from Hansen don’t really bode well for Frey. I think the will and cardio of Hansen will be too much and she will find success in the wrestling and beat her opponent up through three rounds. 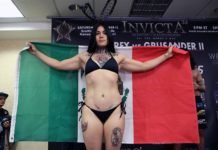 UFC: With Kay Hansen Out, Invicta’s Montserrat Ruiz Steps In Against Cheyanne Buys 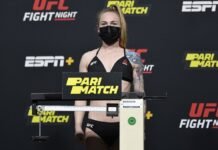