Legacy Fighting Alliance has announced their plans to return to action with four straight weeks of events headlined by title fights beginning on July 10.

After teasing a return on social media recently, Legacy Fighting Alliance (LFA) announced their plans for four straight weekends of fight cards starting on July 10.  The promotion plans to set up residence in Sioux Fall, South Dakota and hold events at the Sanford Pentagon.  The promotion also announced that each event would be headlined by a championship bout.

While the exact logistics were not released, the promotion said in their statement that the events would all be closed off to the public and that there would be strict COVID-19 testing protocols in place for all athletes and personnel.

“I am excited to announced that LFA will be returning with live weekly MMA events in July. We brought the first sanctioned MMA event to the state of South Dakota six summers ago and have a great working relationship with South Dakota Athletic Commission and Sanford Pentagon. This will allow us to set up a safe environment for our fighters and staff, while implementing strict Coronavirus (COVID-19) testing and safeguards to control and ensure a healthy LFA residency on our fight campus in Sioux Falls. Starting on July 10th, we will host four events in four weeks with each event featuring an LFA world title fight.”

The action will return on July 10 with LFA 84 and will feature a fight for the vacant featherweight title between Dana White’s Contender Series veteran Justin Gonzalez (10-0) and Jake Childers (8-0).  LFA 85 on July 17 will be headlined by undefeated Sam Hughes (4-0) taking on fan-favorite Vanessa Demopoulos (4-1) for the inaugural strawweight championship.  LFA 86 on July 24 will feature Greg Fischer (10-1) against Justin Flick (13-5) for the vacant flyweight title.  Finally, LFA 87 on July 31 will see Bryce Logan (11-4) against Jacob Rosales (12-5) for the vacant lightweight title.

With the announcement, LFA will be the second major MMA promotion in the United States to resume action since the beginning of the coronavirus pandemic in mid-March of this year.  The UFC was the first when they returned to putting on events in May. 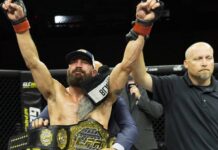